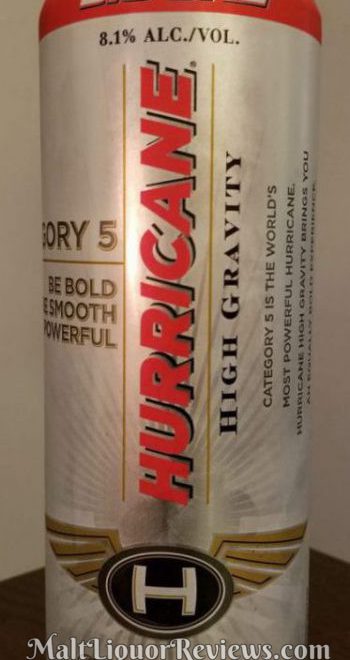 Hurricane season 2017 has been devastating. Harvey, Irma, and Maria have upended the lives of countless people across Texas, Florida, and Puerto Rico. As I write this, much of Puerto Rico is still living without power. 2017 is also the first season since 2007 to be struck by two Category 5 hurricanes. A Category 5 hurricane, in case you don’t know, is identified as having wind speeds reaching 157 m.p.h. or greater and has disastrous effects on cities that happen to be in the path. Knowing this, it seems odd that Hurricane High Gravity Malt Liquor identifies itself as “Category 5” next to the tagline “Be Bold. Be Smooth. Be Powerful.” When I see the images of these cities on the news after being hit by a Category 5 hurricane, I don’t really think of the disasters as being “bold & smooth”. On the flip side, naming your malt liquor “Tropical Depression” doesn’t sound like the best business decision. And for some inexplicable reason, hurricanes sell cheap malt liquor.

Anheuser-Busch released Hurricane in 1996 and was quickly met with criticism. When Anheuser-Busch started brewing Hurricane they already had King Cobra malt liquor on the market, but this was only the #4 best-selling malt liquor. That’s not enough for a giant like Anheuser-Busch. So in an effort to swoop in and gain some market share in the world of high gravity lagers, they released Hurricane. When A-B brought Hurricane to market, they focused on the Latino market and produced marketing material in Spanish which was then distributed to bodegas.

In response, 25 public health groups filed a complaint to the BATF about the name Hurricane since it “connotes strength“. This is not the first time this has been a problem for brewers. WAY back in 1963, Colt 45 faced this same issue since the Code of Federal Regulations, Title 27, Part 7 “Prohibited Practices,” Section 7.29 (g), states that a malt beverage’s label “shall not contain any statements, designs, or devices, whether in the form of numerals, letters, characters, figures, or otherwise, which are likely to be considered as statements of alcoholic content.” But it’s 2017 and we still have Colt 45 and Hurricane on the shelves of stores. With that, let’s talk about the beverage itself. 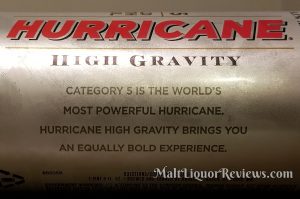 After cracking open the 25 oz can (hey, 1 free ounce!) the first thing I smelled brought to mind Miller High Life. It was a bit mustier than High Life and already smelled like it was higher in alcohol, but it was subdued compared to many other malt liquors. I poured my Hurricane into a glass and found that it was moderately carbonated with a golden color not far off from other typical American pale lagers like Budweiser. Unlike a Bud, however, it was not quite as refreshing. Hurricane somehow gave me extreme cottonmouth and made me thirstier than I had been.

Hurricane was very dry (ironic, I know) and had a slight burn in the chest going down. I’ve tried other high gravity malt liquors such as Schlitz that felt like acid reflux after just a small sip, and this was not that thankfully. I could certainly feel the effects of the booze very quickly with such a high ABV (8.1%). I did not drink the entire can but if I had I’m sure the entire room would have started spinning.

Another flavor I picked up was something metallic, almost like having pennies in my mouth. I’m not sure if this is inherent to Hurricane or if this is unique to the version in the aluminum can. Still, it wasn’t a horribly offensive taste that would prevent me from drinking one. I would make sure it is as cold as possible, however.

Overall, Hurricane was a decent offering in the world of malt liquor. This isn’t something I would go out of my way to buy but it certainly fills a specific need if your goal is to get drunk and not feel like ass.