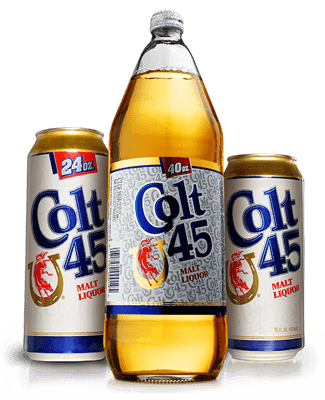 Whenever I think of Colt 45, my mind immediately goes to the classic 1980s TV commercials starring Billy Dee Williams. Billy reminds the viewer that Colt 45 “works every time” and to keep it around “if you wanna have a good time”. Before discussing the beverage and how it tastes, it’s worth noting that the advertising practices of malt liquor companies such as Colt 45 were exploitative of poor black and hispanic communities. During the early 90s, African-Americans comprised 12% of the US population but accounted for 28% of malt liquor sales. Celebrities like Billy Williams and Redd Foxx were icons in the black community and advertisements with their image disproportionately targeted African-Americans. You could get drunk on a high ABV beverage for very little money with celebrities like Ice Cube rapping “get your girl in the mood quicker / get your jimmy thicker / with St. Ides malt liquor“. All of this is enough for a post of its own so I won’t carry on, but it’s interesting to drink Colt 45 in 2017 and think back to this tone-deaf era of unethical marketing tactics.

With all of these icons pushing the narrative that drinks like Colt 45 will get your party started, I have to wonder if things have changed in the last 30 or so years with the recipe. It’s not that it’s bad, because it’s not. The problem with Colt 45 is that it’s boring.

According to their website, Colt 45 comes in at 5.6% ABV which is significantly lower than most malt liquor offerings. I had to find this information on their site because it is curiously left off of the can (is that legal?). Pabst Brewing Company, the brewers of Colt 45, brew their signature Blue Ribbon beer with an ABV of 4.74%; not much lower, and way more flavorful.

When I cracked open the 24oz can I was met with very few floral notes, which was a whole hell of a lot better than getting “skunk”. This distinction will immediately let me know the direction my night is going, so it was welcoming in that sense. I decided for this review to just drink straight from the can, so I didn’t get an idea for what kind of head this produces. All malt liquors tend to have that unsettling piss-yellow color, but from what I could tell this was a bit lighter than most.

The taste was slightly sweet, but really just bland. I’m glad I opted for a 24oz can instead of a 40, because all I could think about was finishing this so I could switch to something more flavorful. I didn’t hate Colt 45, but it’s likely never going to be my first pick at the shitty bodega where you’ll find this sold at. It does go down easy, though.

Colt 45 probably “works every time” if you weigh 105 pounds and ketchup is too spicy, but this is also what I might say about Coors Light. If your intention is to get drunk, I would probably gravitate towards something with a higher ABV. But, like Coors Light, I can see its appeal. Whether or not the recipe has changed in the last 30 years is up for debate, but at least their marketing strategies have changed… right? RIGHT? Oh good lord, no:

-Almost flavorless
-Light and crisp
-At 5.6% ABV, it's on the low side for a malt liquor
-No offending skunky smell